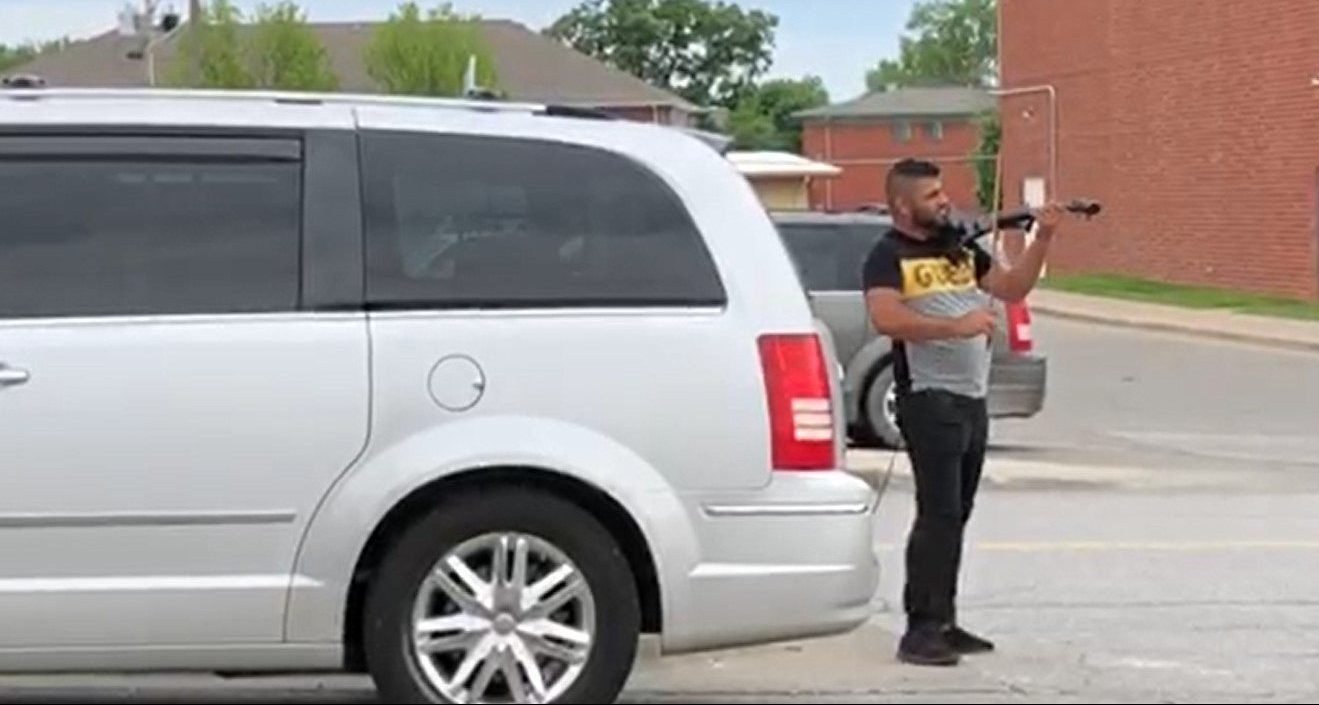 What does it mean to “busk”? Cambridge Dictionary defines the verb as follows: “To play music or sing in a public place so that the people who are there will give money.”

Over the weekend, dozens of people were seen giving money to two men who were set up outside of Hy-Vee at Lincoln Center in Ames, one of the two men appearing to be playing the violin. The men also had a sign posted indicating that they were in financial need. One bystander who had pulled into the parking lot during the display watched the man with the violin jump seamlessly from song to song, including Celine Dion’s classic ballad, “My Heart Will Go On”.

However, the bystander, who wishes to remain anonymous, quickly noticed something peculiar about the busking performance. That’s when he decided to pull out his phone and record what he believes to be a man “miming” or fake-playing the violin to a pre-recorded soundtrack.

He reached out to StoryCounty.News shortly thereafter with the filmed footage. We then forwarded the video to orchestral experts locally to gather their opinions.

Now, before we review the opinions of the experts, we need to make one thing clear: We at StoryCounty.News are not questioning the legalities of instrument miming. We also recognize that countless famous musicians have been known to lip-sync or even mime their own music on occasion.

But is there an ethical difference between a well-known artist lip-syncing a soundtrack featuring their own vocals and a busker fake-playing a violin for donations? That issue can remain up for debate.

In addition, it should be stated that everyone who gave money to the buskers on Sunday gave of their own volition. These were donations. The men were not hired.

With that being said, let us first review Parts 1 and 2 of the submitted footage:

StoryCounty.News reached out to the Department of Music and Theater at Iowa State University this week to see if there was any substance behind the “fake-playing” claim. When viewing Part 1 of the above footage, one ISU orchestra student commented that the violin-playing during Part 1 appeared to be genuine and “real”. However, the student pivoted after watching Part 2. “He’s pretty good at faking,” the student commented. “But it’s fake.”

Sturm went on to explain his viewpoint further:

“Admittedly, at times it appears he is in sync with the music, but at others he is not. The video is hard to watch (jumpy, etc.), but I would say the musician appears (on these videos) to be ‘approximating’ the music, not performing it. Probably a quasi-lip-sync approach.”

According to Sturm, who also happens to be a former busker himself, the need remains great for the support of “real music” in Ames. But what he saw from the man in the videos is what he calls “approximate music”. “In sum, I cannot be definitive concerning all moments on the video,” he concluded. “But, overall, it seems the bow and fingers are moving in ways the music is not, so it looks like faking.”

The City of Ames has busking guidelines posted on its website. These include information for establishments and buskers, as well as city ordinances that govern how street performing is carried out. These ordinances read as follows:

The City’s busking page also lists a series of “Do’s and Don’ts” for performers to note.

Ames Police Commander Jason Tuttle confirmed that a complaint was also made to Ames PD on Sunday regarding the two men.“On Sunday, at about 6:10 p.m., we were called to the east Hy-Vee,” he stated. “The officers went to the area and said there were no traffic backups or concerns that they saw. [The violin busker] was on private property. So, the officers talked to the Hy-Vee manager.”

Upon being notified, Hy-Vee management asked the two men to leave the property.

Hy-Vee Store Manager Kevin Kisling, who was not the manager who responded to the complaint on Sunday, told StoryCounty.News that he was unaware of the situation, but that he believes busking is not allowed anywhere on Hy-Vee property. He also confirmed that it would be the store’s practice to ask such a busker to leave the premises, that is, if the performer was on Hy-Vee land.

On the other hand, Tuttle acknowledged that even if the man with the violin was indeed fake-playing and accepting money, that in and of itself would not necessarily qualify as a crime. “I don’t know that this would even be considered a scam,” he said. “If people are just donating, that’s one thing. If you are selling a service and don’t deliver the service, that’s certainly another thing.”

He also brought up the fact that busking itself is actually more common in Ames than one may initially think. “This time of year brings out more people who are doing things like this,” he noted. “Sometimes we will see them out on Welch [Avenue] on the sidewalk near the fire station, playing on the weekends. They will open up their guitar case, and people will throw money in.”

So, busking, if carried out properly and adherent to city standards, is certainly a legitimate way for one earn some money. But was the mysterious busker outside of Hy-Vee this Sunday an unbelievable fiddler or just a miming swindler? You watch the video and form your own opinion.

Regardless of the true answer, Sunday’s situation reminds the public to be attune to the importance of staying informed. What a person sees or hears can sometimes be deceiving. Unfortunately, we do live in a world that often takes advantage of those who are uninformed.

Moreover, it is obvious that there are still a lot of kindhearted people across the globe and in Ames specifically. That is evident by the widespread generosity demonstrated by locals toward less-than-fortunate individuals in the area. But remember: It never hurts to stay informed and exercise forethought.