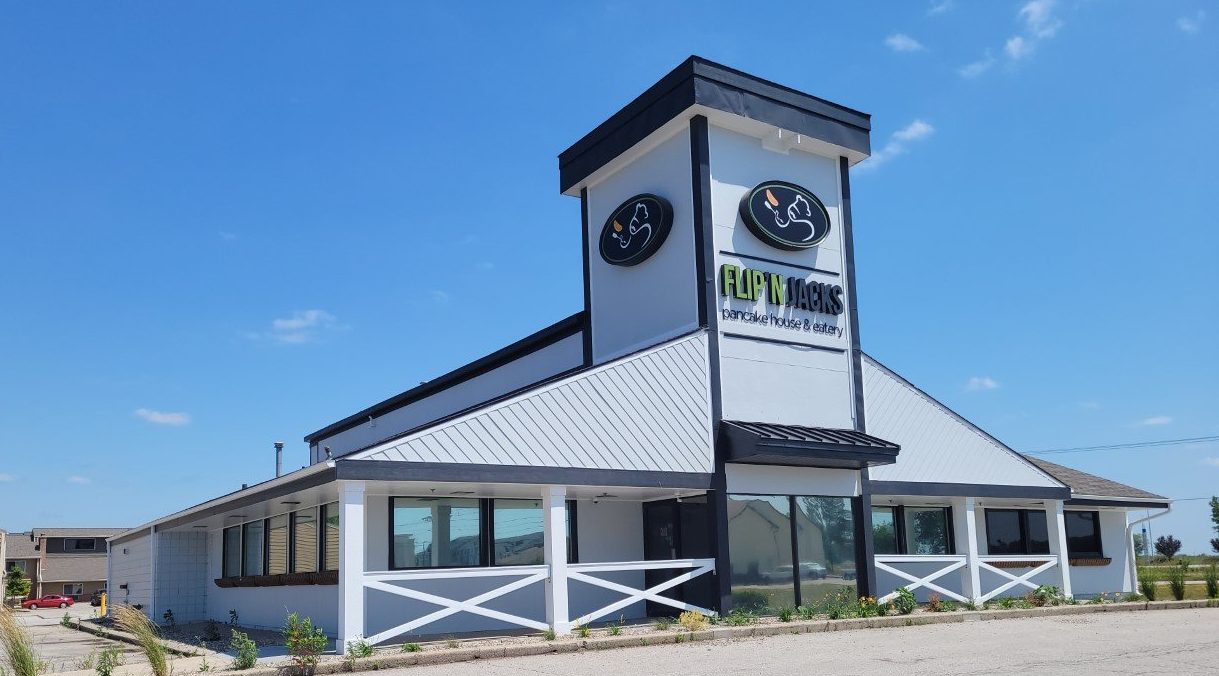 “A touch of the modern pancake house from the big cities.”

Those words should excite a large sum of locals in the Ames and surrounding areas, as they were uttered by one of the city’s newest restaurateurs, Angela Maksuti. Angela and her husband, Ben, have been hard at work as they ready Flip’N Jacks Pancake House & Eatery in southeast Ames for an opening later this summer.

The Maksutis, who currently live in the Des Moines area, have been together in the restaurant industry for nearly three decades. “We have been running restaurants since the late 1990s,” Angela stated. “We started out in Wisconsin. We came to Iowa in 2003. We have had restaurants in southern Iowa and in the metro. We have run a variety of family restaurants, Italian restaurants, and bar and grills.”

Angela stated that the idea of introducing something new to an already diverse community excites the pair of business owners. “We have been coming up here quite a bit,” she explained. “My brother was an [alumnus] of Iowa State [University]. There has never really been a pancake house here. We’re really trying to bring something to the Ames area that is not being offered currently.”

Ben, who immigrated to the United States from Italy when he was just 15 years old, began in the restaurant industry as a teenager in the suburbs of Chicago. His background, along with the couple’s altogether vast experience, is set to ensure no shortage of menu options at the Ames pancake house. “We will have a lot of your gourmet pancakes,” Angela confirmed. “We will have organic coffee, eggs Benedict, omelets, and different skillets. We will also have your classic Midwest tenderloins, your Midwest comfort foods, like hot beef, chicken pot pies, paninis, burgers, and grilled sandwiches. At dinner time, we will have a lot of authentic Italian specials. So, it’s a pretty diverse menu.” The eatery will not feature a buffet initially. However, Angela acknowledged that the installment of one is a possibility for the future.

In addition to the vast number of entrée options, the Maksutis are planning on offering a wide spectrum of drinks, including house-made cocktails. “We are planning on serving beer and wine, along with some cocktails, such as Bloody Marys and mimosas,” Angela said. “And we are also planning on having gourmet coffee and espresso, with lattes and cappuccinos.”

Interior construction continues inside the Flip’N Jacks building, located at 1520 South Dayton Place, which previously inhabited El Azteca, a Mexican restaurant that is now situated just down the road on Isaac Newton Drive. The Maksutis are focused on giving attention to every physical detail of the site, in hopes that the ambience will also attract visitors once the store opens. “It is going to be a real clean, fresh, and modern farmhouse feel,” Angela stated. “[Flip’N Jacks] will be a modern-concept pancake house.”

The Maksutis reportedly have a reputation for running professional and attractive establishments in Iowa. For example, the couple previously owned Tuscany, an Italian restaurant in Ottumwa. That restaurant received the “Image and Beautification Award” from the city’s Chamber of Commerce in 2016, according to the Ottumwa Courier.

With the Covid-19 pandemic still causing issues for business owners across the country who are trying to hire employees, Angela sees Flip’N Jacks opening sometime this summer, but did not yet want to commit to a specific target date. “Our biggest obstacle to opening is staffing,” she admitted. “That is just a nationwide obstacle right now.”

When that time does come, the Maksutis plan to be open for business 16 hours a day, with even more extensive open times as a goal sometime down the road. “To start, we will be open from 6:00 a.m. to 10:00 p.m.,” she said. “We will evaluate those hours as time goes by. We have goals for the future of being open 24 hours a day. But, again, we’re not sure of when that will be.”

Angela concluded by further expressing her own anticipation towards the idea of being able to bring that “big city flavor” to such a diverse community like Ames. “We are bringing a touch of the modern pancake house from the big cities,” she reiterated. “All of our food will have a variety of flavor, made with quality ingredients. A lot of what we have is like what you would find in your pancake houses in Chicago and New York. We are bringing that to the new generation here in Ames.”