Skip to content
Home > Local News > From tragedy to triumph: Chiefs’ shot at repeat means more to one Ames man 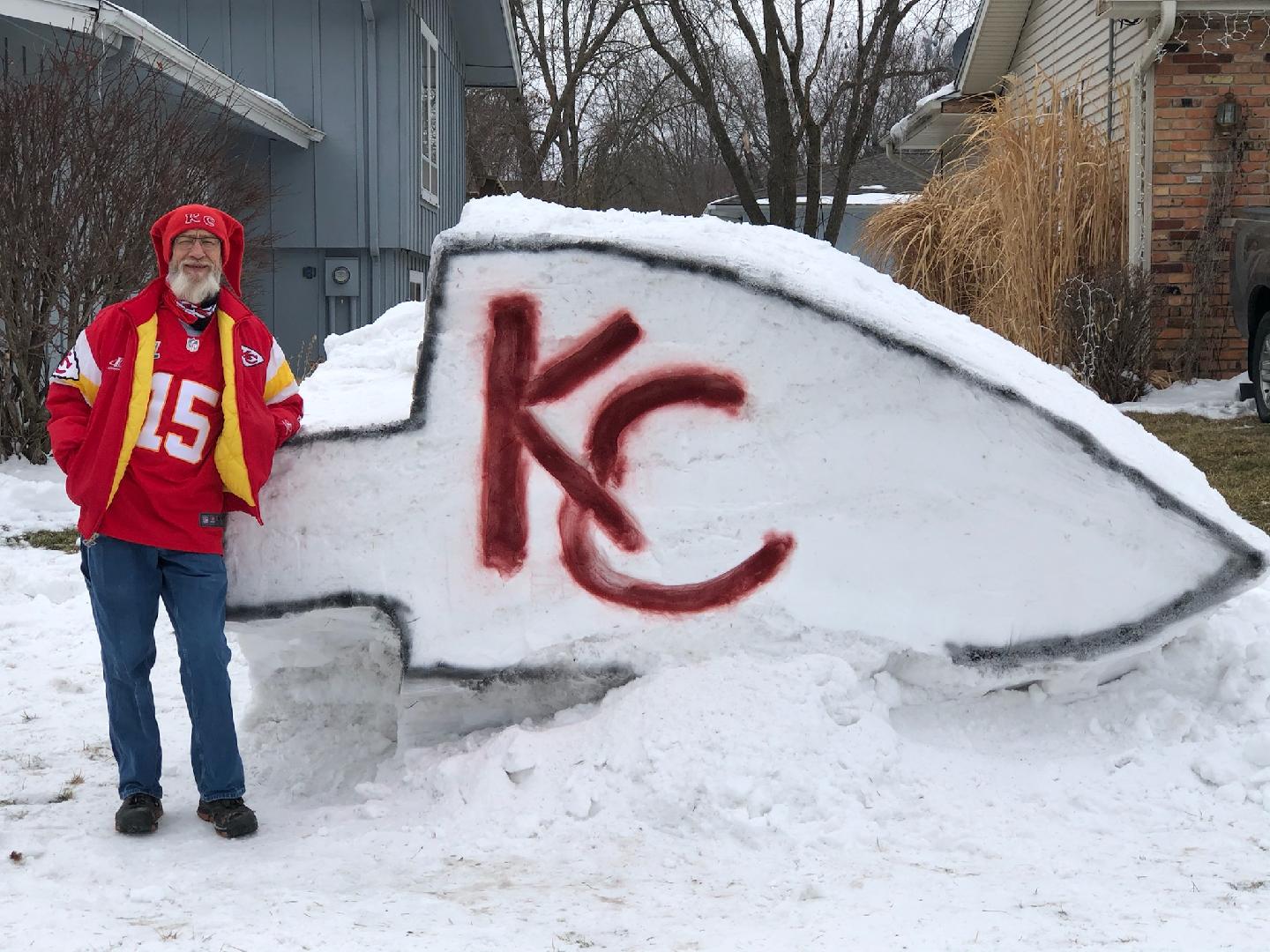 From tragedy to triumph: Chiefs’ shot at repeat means more to one Ames man

It was the late 1980’s. The Kansas City Chiefs had not reached, let alone won, a Super Bowl in nearly 20 years. At the time, Rickie Arthur could not have cared less about Arrowhead Stadium, then-head coach Marty Schottenheimer, or even star linebacker Derrick Thomas. But, as Arthur will attest to, close friendships can change things.

Arthur and his wife have lived in Ames for decades, their home on Hoover Avenue standing as one of the longest-owned houses in the entire neighborhood. It was in the late 1980’s that Arthur was introduced to a Kansas City native who had recently moved to Ames. “My buddy, Mark McNail, and I kind of matched up because of our wives,” Arthur explained. “He had two young boys who were the same ages as my boys.”

In addition to the obvious family commonalities, the two men quickly discovered a different aspect of their personal lives that led to an everlasting bond. “I had quit drinking a year before we met,” Arthur said. “And Mark, at the time, was having the same issue. We started hanging around each other, and it was easy to hang out when neither one of us drank.”

Almost as quick as it took for the two families to draw close, both were suddenly confronted with a change in circumstances: McNail’s employer requested he transfer back to his old stomping grounds, Kansas City. “He had lived here for about four years,” Arthur said. “And over the course of those years, we got to do a lot of fun stuff. But then, he was gone.”

For McNail and Arthur, however, the 230-mile difference was in no way a death-dealing blow to the tight bond that had been established. “He had actually just moved back, and he called me because he got a couple of free tickets to a Chiefs game from his employer,” Arthur said. “So, I went down. Kansas City got beat, and I really wasn’t a big Kansas City fan at that time anyways.”

The two stayed in close touch over the course of the following months. Then, tragedy struck. “Less than one year after [the game], Mark found out that he had a deal with a mole,” Arthur noted. “It turned out to be cancer.” It was not long after his diagnosis that McNail became ill and eventually had to be hospitalized.

“When Mark was dying, I went down and visited him in the hospital,” Arthur said. “When I was leaving, I told him, ‘I have to go home. I’ll see you next Saturday.’ And it was really weird…He just looked at me and said, ‘Rick, you don’t have to do this.’ I said, ‘No, Mark. I want to see you.’ He replied, ‘Rick you don’t have to come back next weekend, because I’m not going to be here.’ Then, that next week, less than a year after [his diagnosis], he died.”

Only those who have experienced the loss of a close friend can truly understand what that feeling is like. For Arthur, it became his duty to extend the legacy that his dear friend, a massive Kansas City Chiefs fan, left behind. Following McNail’s death, Arthur became resolved to root the Chiefs on to a championship. “At that point, in 1991, I took over being a Chiefs fan for him,” he explained. “I kind of just adopted his spot.”

Nearly three decades later, Arthur hadn’t grown tired of his fandom with Kansas City. And during the 2019-2020 season, when star quarterback Patrick Mahomes led his team to comeback after comeback, win after win, Arthur thought something special might be brewing. When the Chiefs defeated the San Francisco 49ers in Super Bowl LIV with the final score of 31-20, it still seemed surreal to Arthur. “I’ve been rooting for them for about 30 years,” he laughed. “I’ve been like ‘C’mon!’ And we finally got a Super Bowl.”

Chiefs fandom isn’t the only way Arthur has been able to honor McNail’s life. In addition to Arthur’s daily job at 3M, a large conglomerate company with a plant located on the east side of Ames, he also latched onto a small business venture that McNail started while he lived in Story County, one that Arthur has turned into a fairly large and successful operation. “Another weird part of that story is Mark had a financial situation towards the beginning of our friendship,” Arthur noted. “He was mowing yards on Saturdays with his wife. He was just trying to pick things up and get himself out of a hole. He needed help, so he said ‘Rick, go mowing with me on Saturdays. I’ll pay you fifty bucks for the afternoon.’ And I just was like ‘Mark, I don’t really like mowing grass.’ But I ended up helping him.”

Sometime thereafter, McNail was faced with the move back to Kansas City. He quickly called on his friend to take over the lawn care operations. “When he got transferred, he had like ten customers,” Arthur explained. “He said, ‘Here Rick, for a hundred bucks, I’ll give you my two mowers and the ten customers, and you can take over the business.’ Thirty years later, I’ve got about $30,000 worth of equipment, and I mow all of the Northridge area. The mowing kind of pulled Mark and I together, along with our age, our kids, and our past drinking struggles. So, by continuing the business, it’s kind of like he’s here with me all the time.”

Arthur’s home has received a good amount of attention over recent days after he created a large snow sculpture, in the shape of the Kansas City Chiefs arrowhead logo, with a bit of help from his snowblower and some spray paint. Passersby have seen the large piece of art in his front yard, and some have even stopped for photos. “It hit Facebook,” he said with a chuckle. “My wife told me ‘It might go viral!’ People have been sharing it and tagging me in it. My wife said the other day that there were probably about 40 people who stopped to get pictures of it.”

Rickie Arthur’s latest and most impressive rendering of the Chiefs logo measures approximately nine feet wide and six and a half feet tall. The entire sculpture was created exclusively with snow and a little bit of spray paint. (Photos: StoryCounty.News)

Arthur claims to have no artistic or sculpting background. One would never guess it, though, as this is the third “winter arrowhead” he has created over the past 13 months. “When my kids were young, we used to make these really cool snowmen,” Arthur commented. “When Kansas City was getting ready to play in the Super Bowl last year, I said I would try to do an arrowhead. So, I did an arrowhead last year. Then, this year, I did one in my yard about mid-season. Then I decided, ‘Yeah, they made the Super Bowl. Let’s go out and make a big one.’” Arthur’s most recent version of the arrowhead measures approximately nine feet wide and six and a half feet tall. The arrowhead from earlier this season was smaller, measuring in at four and a half feet wide.

What is Arthur’s feel on the big game this Sunday? “I’m definitely nervous because of it,” he confessed. “I remember when [Tom Brady] knocked us out of the playoffs at Arrowhead Stadium in the last minute in 2019.”

Super Bowl LV certainly is a historic opportunity for Chiefs fans. An opportunity for back-to-back Super Bowl wins for the first time in Kansas City franchise history. A chance for a rising star in Patrick Mahomes to defeat one of the greatest competitors to ever play the game in Tom Brady. But for Arthur, it means more. It’s a chance to root on the team his close friend loved. And root them on to victory. “I do think the Chiefs should be able to win it,” he concluded. “I’ll take Kansas City, 31-27.”