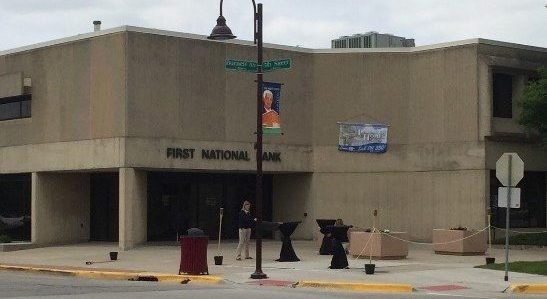 An Ames man has been arrested following a scary incident at a downtown bank on Wednesday afternoon.

According to Ames Police Commander Jason Tuttle, 24-year-old Kang C. Chotkuac entered First National Bank at 405 Fifth Street just before 4:32 p.m. Shortly thereafter, he leapt over the tellers counter. “Basically, he jumped over the counter and demanded money several times,” Tuttle noted. “He then fled out of the bank. He did not get any money, but he very much scared the tellers when he jumped over the counter.”

Chotkuac, who was reportedly unarmed, then took off. “He fled the bank and got into a vehicle with two guys,” Tuttle stated. “They were not waiting for him, but he asked them for a ride.” Ames PD was alerted to the incident by means a panic button that was pushed at the bank.

It wasn’t long before the vehicle was stopped by Ames PD, just blocks away from the bank. “Officers saw him in the back of the vehicle, and he matched the description,” Tuttle said. “We had a description of the vehicle as they were leaving, too. So, we stopped them and took him into custody.” Chotkuac was said to have complied with the arresting officers.

Even though Chotkuac did not yield a weapon and was unsuccessful in getting any money in the attempt, he now faces a charge of Second-Degree Robbery, a class “C” felony. “Odd circumstances with this one,” Tuttle concluded. “It’s not the typical bank robbery situation that we see.”

According to a press release, Ames PD is still investigating the incident. If you have any further information regarding the crime, you are asked to contact investigators at 515-239-5133 or anonymously at 515-239-5533.