Skip to content
Home > Local News > The Cornucopia in Ames to host Fahrenheit, Will Keeps on Friday 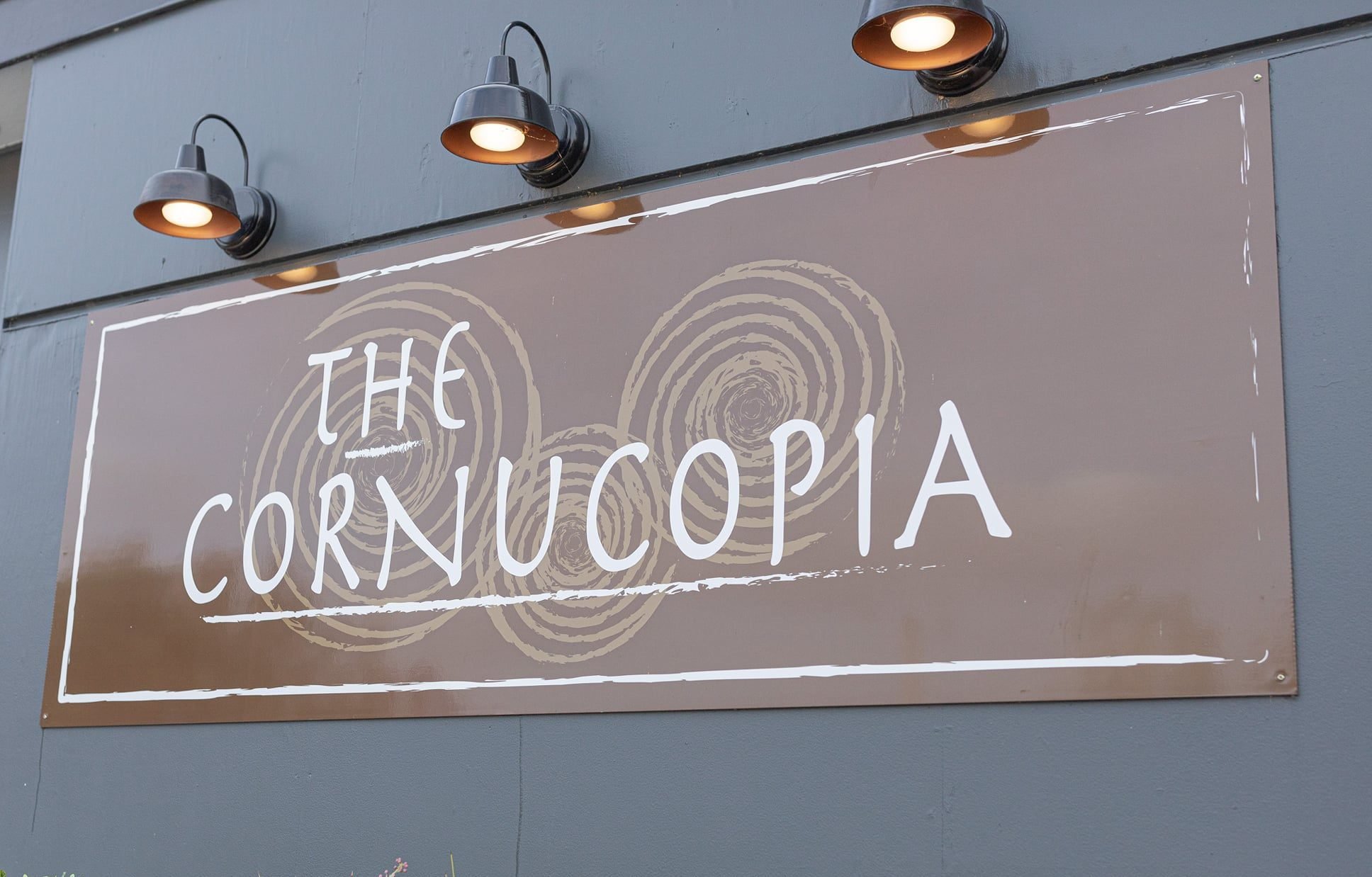 The Cornucopia in Ames to host Fahrenheit, Will Keeps on Friday

Those familiar with The Cornucopia in west Ames have for several years known it to be a restaurant, bar, and center for quality home goods and furniture. In recent weeks, though, people have begun to change their views a bit. And rightfully so.

According to Events Director Lisa Downs, the West Lincoln Way business has converted its site into a full events venue. Downs explained that when the store got shut down for six months amid the pandemic, Owner Graham Watkins and General Manager Ann-Marie Widdowson began looking at ways to transform what used to be a location that could only handle small events and parties into a significantly larger and more accommodating facility.

Now, just a couple of weeks into the venture, the public’s reception has been quite positive. “People seem to really, really like it,” Downs noted. “Hopefully this is going to be something just really good for Ames.”

This week, The Cornucopia welcomes central Iowa’s own Fahrenheit to town. For people who are not familiar with the band Fahrenheit’s music, Downs said to expect a high-energy performance. “Fahrenheit is known as Des Moines’ famous dance and party band,” she said. “They’re just a really fun group of guys.”

Band member Scott Dawson spoke to StoryCounty.News about his crew’s trip to Ames Friday, and he repeatedly returned to one adjective when describing the group: Diverse. “We are all-inclusive,” Dawson explained. “We play a wide variety, new and old. Top 40, R&B, country, classic rock, and other classics. Anything from Bruno Mars to Dwight Yoakam. Even ‘Brown Eyed Girl’ and party songs, too.”

Fahrenheit, like every other band, dealt with its fair share of scheduling changes in 2020 due to the pandemic. Still, Dawson remained thankful the group successfully stayed together and continued to perform. Apart from a few weeks when many businesses were completely shut down, the group’s schedule surprisingly remained steady all of last year. “We took cuts in pay and worked different hours and shorter hours since places were closing early,” Dawson said. “But we were grateful to be able to lend our services to help venues and keep music in people’s minds.”

One of the major storylines circulating around Friday’s show is the anticipated guest appearance of Will Keeps, an activist and public speaker who has become a fixture in the Des Moines area due to his work in helping young. Keeps, who is also a rapper, teamed up with Des Moines Senior Police Officer Mike Moody earlier this year to produce a now viral rendition of Bon Jovi’s ‘Livin’ On A Prayer’, which was produced with a music video. Moody now performs as part of Fahrenheit.

“I’m about building relationships,” Keeps stated Thursday. “Mike Moody and I are friends. We may not agree on certain things, but who does? We are friends because we both look at the endgame. And that endgame is that our friends, our families, and our kids are safe. That’s why Mike and I get things done. We may disagree at times, but we know have to keep moving.”

With the widespread tension between the African-American community and police officers, the relationship between Keeps, who is black, and Moody, who is white, has often been brought to the fore. Keeps hopes the pair’s friendship will help others to think reasonably and avoid stereotypical thinking. “I believe that if a police officer does something wrong, we need to hold that officer accountable, not all police,” he said. “Even within the community…If a white person does something bad or a black person does something bad, we hold them accountable, not the entire race of people.”

Moody expressed similar sentiments on Thursday, expressing optimism that widespread social barriers could begin to be tore down in response to the two men’s efforts. “Will and I have a very unique relationship,” Moody expressed. “I think it really breaks down a lot of walls that a lot of other people aren’t willing to break down. He comes from a completely different background than I do. What we try to work on the most is trying to understand each other, where we come from, and what we deal with. I think it’s a pretty amazing relationship, honestly. We’re very respectful to each other, and I just think it’s very unique.”

In recent years, Keeps has worked hard to open “Starts Right Here”, a non-profit in Des Moines that helps young people stay on the right path as they head into adulthood. In addition, he is aiming to start his own charter school with a similar model. “The school involves kids that have dropped out of school and kids that have registered for school but aren’t going to school,” he said. “We want to get those kids back engaged, so that they can get an education. What ‘Starts Right Here’ did was change how education looks for these kids.”

Keeps remains open about his difficult years of childhood. Growing up in Illinois, he experienced sexual abuse at a young age and turned to gang life to find acceptance and love. Now, he has a program within ‘Starts Right Here’ that is designed to positively influence young people who may be experiencing the same challenges he did during his youth.

“I have a program called “The Porch”,” he stated. “We actually sit on the porch that looks like mine did back in Chicago. The reason we call it that is because, growing up, a serious conversation would always happen on that porch. I had brought this program to the Des Moines Public Schools, and it was very successful. So, I wanted to build an actual porch for the program, and that’s what we did.”

According to Keeps, the entire “Starts Right Here” model is about more than just ensuring children a basic education. It’s about life-changing mentorship. “We built a building with classrooms and mental health counseling,” he relayed. “We have a gym where they can work out, a beauty studio, and an entertainment game room. We want to help kids in the outside world, as well. We want to help them get an apartment, jobs, and help them get better with their mindset.”

Just this month, an Iowa law was made official by Governor Kim Reynolds that makes it easier for charter schools to form by allowing groups to apple directly to the Department of Education. Previously, new schools were forced to apply through their local school board. Keeps remains optimistic that his own charter school will be able to be launched in the very near future.

Still, Keeps sees a need for further financial support from the powers that be. He feels that an investment into the future of young people now will only pay massive dividends in the future. “People are worried about their taxes and money,” he acknowledged. “In my mind, it’s the kids that come first. We can worry about the rest later. I believe that if we have successful kids, money won’t be a problem.”

Keeps sees himself speaking for the cause Friday, but he indicated that a song or two could very well be up his sleeve as well. Given his collaboration with Moody being a fan favorite, Fahrenheit and Keeps will look to incorporate a version of the song at some point in the evening. “Being able to come to Ames tomorrow is very special to me,” he concluded. “I want to be able to perform with Mike.”

“We might do that tomorrow,” he said with a chuckle. “I’ve got to get myself mentally ready.”

Will Keeps and Fahrenheit, featuring Officer Mike Moody, will speak and perform at The Cornucopia, located at 6008 West Lincoln Way in Ames, Friday night at 7:00 p.m. Entry is $5. Drinks and food will be available for purchase. First responders and veterans that show their badge at the event will receive a ticket for a free drink.

The Cornucopia will be hosting performances on Friday and Saturday nights moving forward, including a show from the band Stranger Than Fiction this Saturday at 6:00 p.m. For more information on future events or booking inquiries, visit www.TheCornucopia.com, or visit the venue on Facebook.

POST-EVENT UPDATE: Following Will Keeps’ speech at The Cornucopia, he sat down with Cory Brada of StoryCounty.News to discuss his vision, among other things. View the interview below or on our YouTube channel.