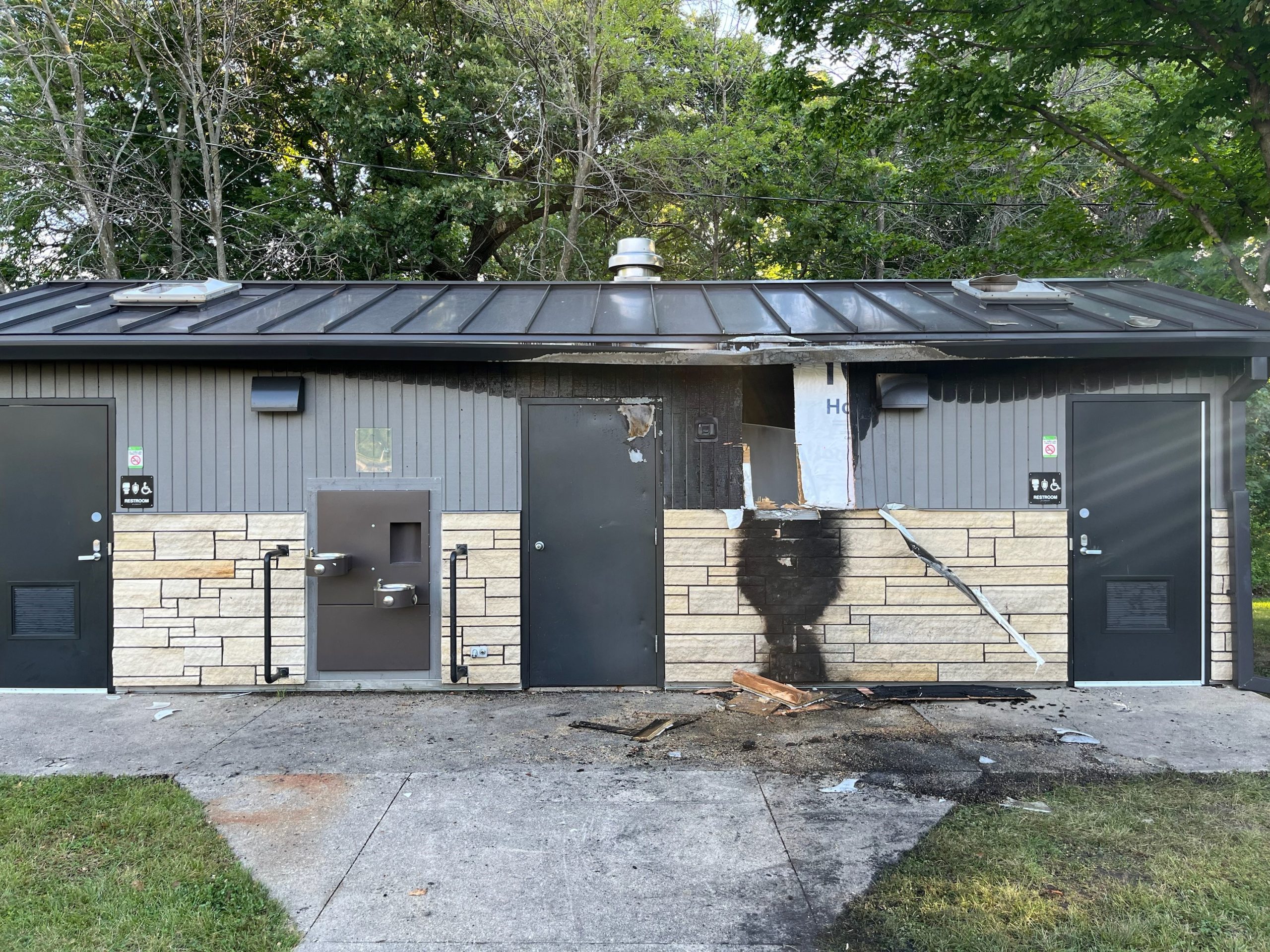 A suspicious fire that began late Thursday night at Inis Grove Park in Ames is estimated to have caused approximately $20,000 in damage.

According to Ames Fire Chief Rich Higgins, authorities responded to the city park, located at 2500 Duff Avenue, at around 10:45 p.m. Thursday. “When crews arrived on scene, they found a trash can on fire over by Miracle Park,” Higgins stated. “Then, they found another trash can right next to the restrooms. It had spread into the ceiling and roof area under the eaves.

Firefighters were able to gain access into the bathrooms, which are situated just north of the Walnut Shelter, in short order, addressing the flames in the top of the structure. “Crews were able to open up the door using our knock system, which is our secure key system,” Higgins said. “So, they didn’t have to break down the door on the one side. They were able get in there, knock the fire down that was up in the ceiling, and get it extinguished.”

According to Higgins, the Ames Fire Department and Ames Police Department suspect that the fires, which began in separate trash cans, were set intentionally. “It’s obviously suspicious,” he acknowledged. “It is a park, but this occurred at night. There were reports that kids were seen running away from the area shortly after the fire started.”

A press release from the City of Ames stated that four total trash cans were discovered to have been set on fire, three of which were near the Shagbark Shelter, and the other near the Miracle Playground.

“We are continuing our investigation with the Ames Police Department,” Higgins said. “We are hoping to learn more, but trash can fires are sometimes hard to determine how they started.”

City of Ames Parks and Facilities Superintendent Joshua Thompson told StoryCounty.News that the bathrooms have been shut down by the blaze and will remain closed until adequate repairs can be made. “Unfortunately, it might be closed through fall,” he stated. “But we just don’t know yet.

“We just finished building the structure in 2020. It was brand new.”

The City of Ames does not currently deploy video surveillance throughout its park system. However, events like this one could ignite change, Thompson indicated. “We have talked about it in certain locations, but it just hasn’t gained a lot of traction,” he explained. “Hopefully, it will soon.”

Higgins noted that trash can fires, although somewhat common, rarely end up causing such extensive damage. “We probably get around a couple dozen trash can fires every year,” he relayed. “But when they’re right next to the building and cause a lot of damage to public restrooms in a park, that hurts even more. That takes a bathroom out of service for families that want to visit the park.

“There is also the cost to rebuild it. That’s a cost that all of us as taxpayers will pay, due to someone’s careless use of fire.”

Anyone with information regarding the Inis Grove Park fires is asked to contact Ames PD at 515-239-5133. Reports can also be made anonymously by calling 515-239-5533 or by visiting www.crimestoppersofcentraliowa.com.