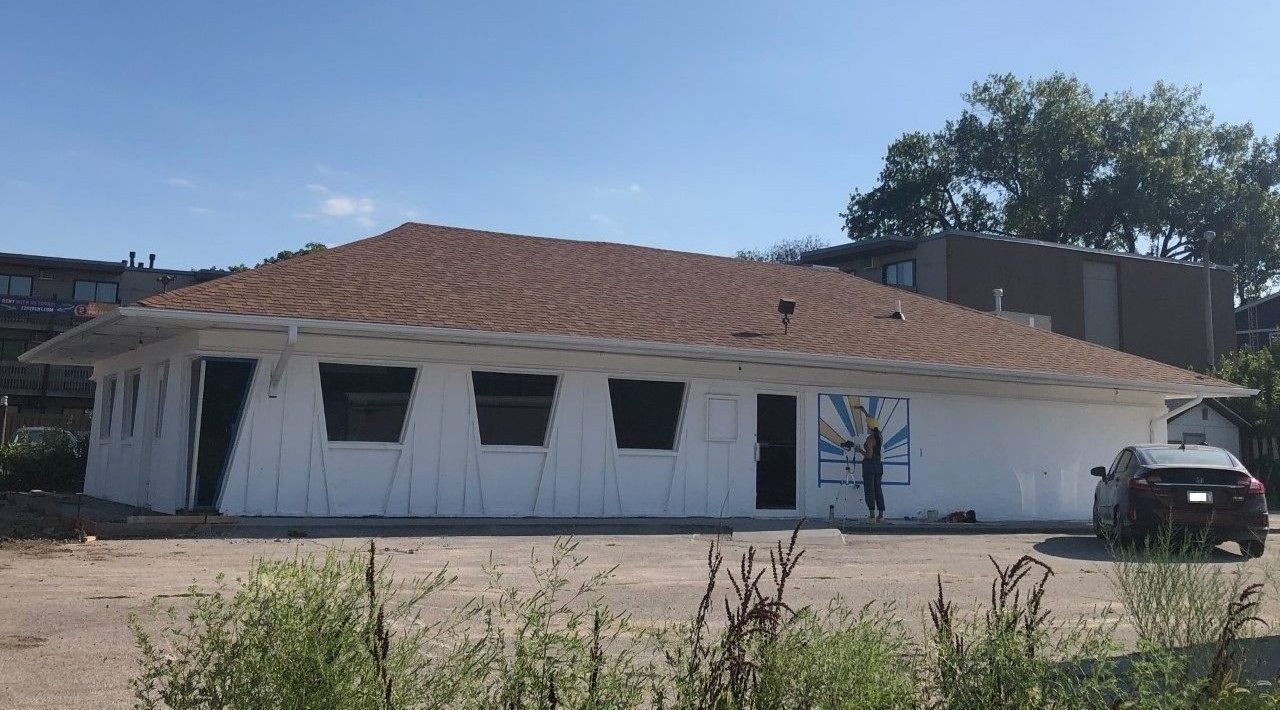 After remaining dormant since late 2019, the building that once housed Indian Delights in west Ames is now being filled.

Daytime, a new restaurant which will feature brunch menu items, along with original coffee and specialty drinks, is currently being readied for a late summer opening. Owners Stan and Ashley Rivera are currently hard at work preparing the restaurant’s interior. “We like to do the whole interior design ourselves,” Ashley explained. “We found the space and felt like it lent itself to this. We wanted to have something that is inviting and a place where people would want to come in and have an experience.”

Ashley commented that the Dotson Drive location is also expected to be well-suited for sufficient traffic, given the number of businesses already in place nearby. “We weren’t necessarily looking specifically at the west side of Ames, but when that spot came up, we felt like the location was great for visibility, being by the west Hy-Vee,” she said. “We really liked that it was a free-standing building, so that we could really make it our own and give it our own feeling.”

The couple has a longstanding reputation in the coffee business, having operated several restaurants on the East Coast. “We have been in the coffee industry out in New York for seven years,” Ashley noted. “We have three shops currently. They are doing great and continuing to run. After we moved here, we wanted to continue staying busy.”

“We wanted something coffee-focused, but we felt like we needed to do a little more than just a coffee shop. Brunch just felt like the natural thing. Usually, brunch is associated with a happy occasion. That’s what we really love to do, to create a whole experience and vibe.”

It wasn’t long after the concept for a brunch eatery was hatched that the Riveras began to develop their unique menu. “We will have mimosas, Bloody Marys, and a fresh juicing machine,” Ashley continued. “We want everything to be very fresh. We’ll have great, quality coffee, espresso drinks, and we will have baked goods. We have really good banana bread, cookies, and scones.”

In addition to baked goods and an assortment of drinks, Daytime is also expected to offer various menu options that will be featured exclusively at select times during the year. “We’re still figuring things out,” Ashley explained. “Homemade biscuits, avocado toast, and even tacos will probably make their way to the menu. We would love to inject some seasonal items and rotate things.”

Although a drive-thru is not expected to be offered, seating inside, along with delivery options, should be plentiful. “We will have quite a bit of booth seating,” she stated. “It’s not built yet, but we will have an outdoor patio. It won’t be ready by opening day, but we’re hoping to have a pergola on it, too.”

The store is expected to be open seven days a week, according to Ashley. Daily hours of operation are still being finalized, but Ashley reiterated that the restaurant is designed to a accommodate “daytime” concept.

The Riveras are expecting to be ready for a grand opening in the coming weeks. In the meantime, they are hopeful for a bright, sunny future in west Ames. “Our coffee background and the product we serve is really our core and foundation,” Ashley concluded. “We hope that people are excited about getting good coffee, in a really fun and relaxed place.”

Daytime will be located at 127 Dotson Drive in Ames. The Riveras need culinary and baking experts, along with baristas and servers, before they will be able open Daytime’s doors. Anyone who is interested in inquiring about employment at Daytime is encouraged to email the Riveras at daytimediner@gmail.com.